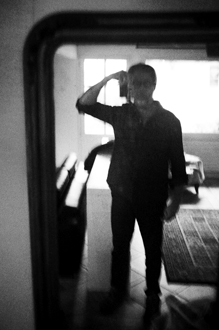 French photographer born in Paris in 1964.

At 14, he was given his first camera, a Canon AE1, he discovered photography with enthusiasm and exaltation. Encountering categorical refusal from his parents to enter
a photography school, he was forced to follow a very different orientation! Diploma in carpenter's pocket, he left the family bosom and at the age of 18 did his military service
at 118 “Colonel Rozanoff” air base in France.

Determined not to continue in the wood industry, and still passionate about a certain creative vision, he took the advice of a friend in the graphic arts. A few months later,
he began his professional life as a graphic designer by joining a written press company in Paris. Relentlessly, he continues with passion, his black and white shots
in his daily life. A few years later, in 1991, he continued his career, still in Paris, in an advertising agency, as graphic designer, then artistic director. He continues
his photographic quest by regularly integrating it into his graphic creations.

After thirty years of work in the media world, he devotes himself to self-taught photography. In recent years, he has developed a personal vision documentary photography.
Often shrouded in a twilight atmosphere, he inscribes his images in a direct and sensitive approach. He leaves a place important to the unexpected, to ordinary moments,
but shows a demanding gaze and a characterized author's writing. Passionate about travel stories, he also writes his texts which corroborate each of the photographic
universes created. Generally, subjects impose themselves on him when he travels, his inspiration can be triggered by an encounter, a place or an unfavorable weather
that he particularly appreciates.

In 2015, he began a long-term project in North America, a photographic essay entitled "1534" devoted to the discovery of Canada by the French explorer Jacques Cartier.
He favors black and white in 24x36 format to give this documentary and contemporary work all its original dimension but the photographer was unfortunately interrupted
by the Covid-19 pandemic and its traffic restrictions. The photographer plans to resume his report in 2023 in order to extend his work along the St. Lawrence River
and on the island of Newfoundland.

His images have been exhibited in Canada and France, he has been published in several digital magazines: The Eye of Photography, Inspired Eyes and Eyes Photo Magazine.

He is now a member of Divergence Images, an independent platform of freelance photographers.